Refugecation
For refugee children in Hamburg, education offers the quickest way to prosperity. But the change also brings new challenges.

DARINA GRIBOVA, ARUNA VALLIAPPAN, THOMAS VOGEL
and KOLJA WARNECKE
Sitting on a bench overlooking Outer Alster Lake in central Hamburg, Abdullah Abdalal remembers his childhood years in Damascus, Syria's capital city, playing video games, eating family dinners and walking his dog. But everything changed in 2011 when popular protests against President Bashar al-Assad turned violent as the government responded forcefully to quell the demonstrations. As the brutal conflict dragged on and the teenage Abdalal approached 18 – the age of compulsory military service – he and his family developed a plan.
Just over a year ago, in March of 2015, the 17-year-old crossed into neighboring Turkey and began the long journey north toward Germany, a common destination for many Syrians fleeing the terrible violence, suffering and destruction devastating their country. After crossing the Mediterranean to Greece on a crowded smuggler's ship, Abdalal followed a typical overland route, through the Balkans and Eastern Europe, enduring long walks, police beatings and stifling, overcrowded trains along the way. Four months later he reached Hamburg with only a few hundred Euros, a broken mobile phone and his old Syrian identification card. His new life had begun.

"I didn't have clothes from Syria. I did have only clothes I bought in Serbia," Abdalal says. "When I come, I buy all new clothes. I wanted to forget everything [about the journey]."

Abdalal is just one of roughly 137,000 refugee minors who applied for asylum status in Germany in 2015, according to the Federal Office for Migration and Refugees. Although many refugees must undergo an arduous journey just to reach Germany, building a new life in a foreign country can be just as difficult. Education is one service the government provides to help newly arrived refugees successfully integrate into German society. Schools in Hamburg – and all across Germany – provide one-year introductory courses, which include intensive German language training, for all refugees under 18 years old, according to Ties Rabe, a senator in Hamburg and a member of the Authority for Education and Training, a government agency. But language barriers, social isolation and traumatic personal experiences pose problems for many refugees.
Abdullah Abdalal, 17, has experienced discriminatory name-calling by Germans but he tries to focus on positive encounters.
Abdalal lives in Poppenbüttel, in northern Hamburg, but commutes to St. Pauli, a neighborhood situated along the banks of the Elbe river, for classes. He enjoys studying English, mathematics and computer programming.

But like many other refugees, Abdalal traveled alone, so initially he lacked a strong social network to provide the emotional support he needed to navigate the new culture and unfamiliar society.

His first few months living alone were difficult. For the first time in his life, he was responsible for cooking and cleaning. For the teen, the quick transition to adulthood was almost too much to handle. He even debated returning home, but a phone call from a friend back in Syria changed his mind.

"He told me, 'No, you are in Germany to do your dream.'" Abdalal recalls. "'Don't give up your dream. You must continue.'"
Outside of school, Abdalal stays busy dancing hip-hop and in-line skating. These hobbies are helping the teenager overcome a typical obstacle for many refugee students who find it difficult to develop friendships with native Germans.

Some of Abdalal's classmates, like Kelvin Asante, who came to Hamburg from Ghana, in West Africa, in 2015, are not as fortunate.

"[I'm] only speaking to my family and friends," Asante says. "I don't have a link to the Germans."

Abdalal, who is the youngest of three children, keeps in regular contact with his mother, father and siblings.

"If I don't send a picture every day, my mother will come and kill me," Abdalal says, chuckling. "She is so afraid."

Still, Abdalal does not want to burden his family, so he often is not completely honest when he contacts them back in Damascus. 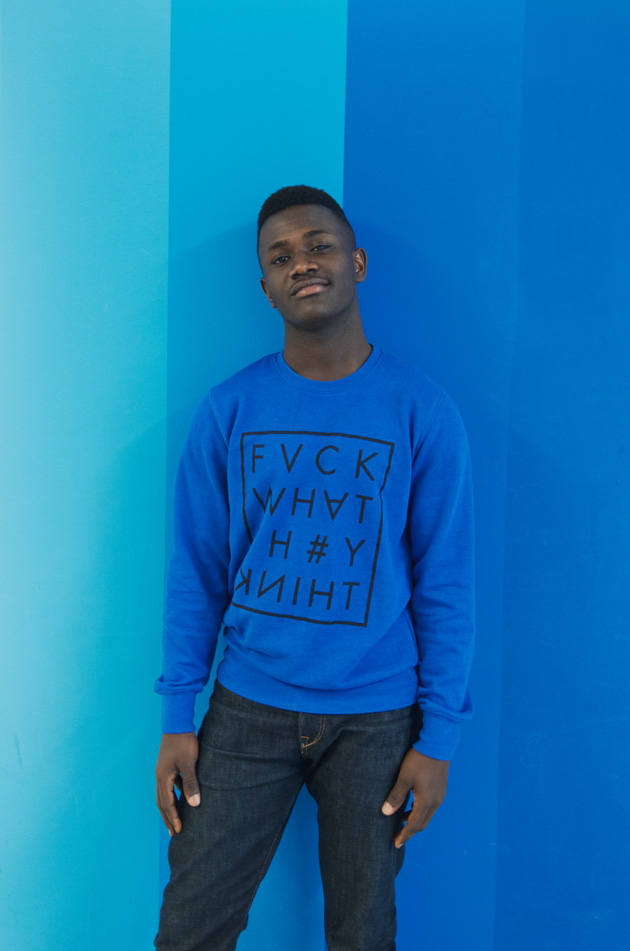 Kelvin Asante, 18
Kelvin fled Ghana in 2015. He plans to stay in Hamburg and hopes to raise a family one day.
One resource for helping students adjust to German society are teachers, like Xenia Paschke, who runs Abdalal's preparatory class. Paschke began teaching refugee preparatory classes three years ago and says her job, although enjoyable, is difficult.

"We have a lot of really motivated students. They are really interested in doing things well." Paschke says. "[But] they're traumatized; they have a lot of problems."

Students like Abdalal often deal with difficult personal issues, like stressful travel experiences and fretting about family members back home. Abdalal's family, for instance, lives near an airport in Damascus, and he says he worries that crucial facility will be bombed and his family will be hurt or killed.
Xenia Paschke, 42, has taught preparatory classes for the last three years. Her love of language continues to motivate her work. But some of her colleagues are not as enthusiastic about teaching refugees.
Teachers, including Paschke, complete training to help interact with traumatized students. There are also social workers that teachers can reach out to for additional help. But because of time constraints and budget limitations, that help is too often not adequate.

Refugees themselves also work to process difficult life experiences. A 20-year-old Afghan refugee, for instance, who prefers only to be known by his pseudonym, Kamas, now writes poetry and plays to engage with his past experiences. He says he avoids conversations about past painful experiences in school.

Language barriers are another concern for teachers and students alike. Lotfullah Beki fled Afghanistan and arrived in Hamburg about a year ago. The 17-year-old spent five months in a preparatory class before transitioning to a regular class, filled with native Germans.

But not every refugee student in Hamburg is a teenager.
May Dürolf works at an elementary school in Horn, in eastern Hamburg. She says her young refugee students, unlike Abdalal or Kamas, often travel to Germany with family members and have more emotional support and domestic stability upon arrival.

"We['ve] never really had strongly traumatized children." Dürolf says. "Now and again, we do have children who are unhappy but we['ve] never had a kid who has been very aggressive, constantly crying or very jumpy."

However, Dürolf and her colleague, Kathrin Korn, must overcome several pedagogical challenges. Some of their students arrive mid-way through the school year and are hesitant to interact with other children. Despite their shyness, the students are enthusiastic learners.

"[Refugee] children in our preparation class[es] are willing to learn a lot of new things." Korn says. "There are a lot of pupils in the regular classes who are not very interested in learning." 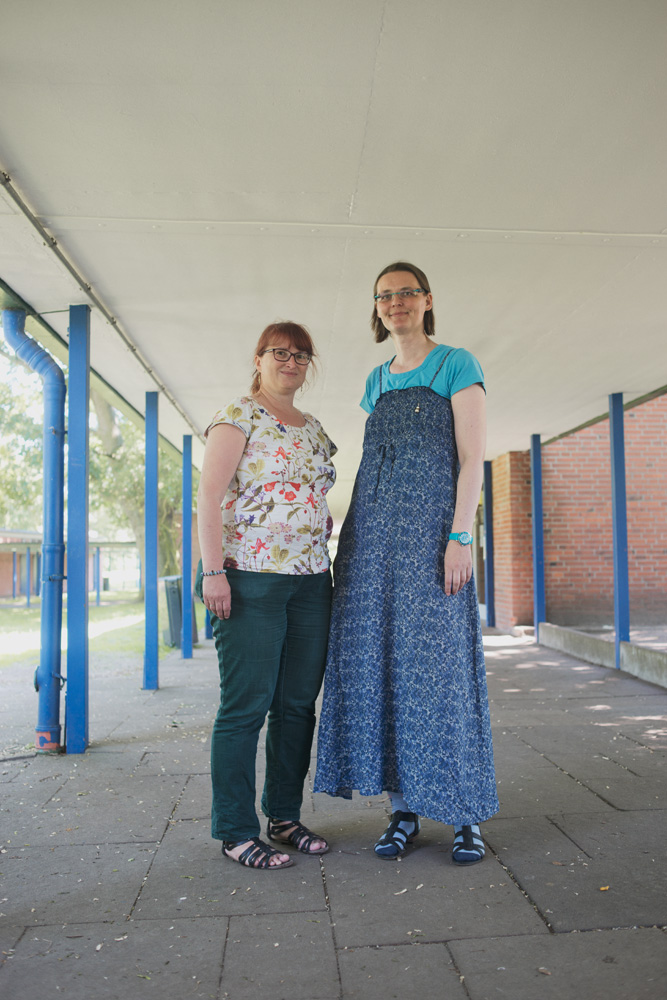 Kathrin Korn, 49, and May Dürolf, 46
The teachers agree they have benefited from government-run trauma response training classes.
"We can teach the [refugee] kids something and that feels like we were teachers." says Madleen-Sofie Riedel, a 9-year-old German native. "For example, we tell them to erase something, because it's wrong and we help them with new terms."

Despite the interaction among native and refugee children in school, cultural differences and economic disparities prevent many friendships from developing. One of Riedel's classmates, for instance, always eats white bread, a cheap foodstuff, at lunchtime.

"I think that she is ashamed [of] it." Riedel says. "She is always hiding it in her lunchbox."
Roy Louli, 10
Roy fled Syria with his family in 2015 and crossed the Mediterranean in a rickety, overcrowded smuggling vessel. Although Roy enjoys swimming, his older sister is now afraid of water.
Madleen-Sofie Riedel, 9
Madleen-Sofie a native German likes learning about other cultures from refugees classmates. For her it does not matter where her friends were born.
Ahmad Al-Sabahi, 11
Ahmad fled Syria with his parents and siblings. Now, he dreams of his grandmother to join the rest of the family in Hamburg, Germany.
Mariam Sayed Darwish, 11
Mariam fled Egypt in 2015. She enjoys school but dreams of visiting home one day.
"Zuhause-Rap" (in collaboration with Biggi Krebs)

There are language barriers, too.

Roy Louli fled Syria with his family last year. The 10-year-old enjoys playing brännboll, a sport similar to baseball, during recess, but says he has struggled to make any German friends.

The refugee students in Dürolf and Korn's classes, though, try to help each other.

Another student, Ahmad Al-Sabahi, performed well enough to enroll in a regular class, filled with native German speakers. With the greater exposure to local children, the 11-year-old, unlike Louli, has made some friends there.

As refugee students work to overcome social isolation in school, private groups, such as Visions for Children e.V, a Hamburg-based organization, are stepping in to provide cultural competency training to teachers to help avoid communication gaps and misunderstandings.
Kamas, 20, is an Afghan who fled to Hamburg in 2011. He still feels like a second-class citizen in Germany. To help process his life experiences, Kamas writes poetry and theatre. An English translation of one of his poems reads: Man needs good friends, like the doors and walls of Saint Petersburg, and loneliness of Paris, and fatigue of Milano, and some more states foreign for you...
"I'm sorry to say but the teachers do not know anything [about the cultural differences]," says Hila Limar, chairperson at Visions for Children. "In Afghanistan, for example, you do not ask people too many direct questions."

But Limar was careful to note the situation has improved. As more and more refugees arrive in Hamburg, the lack of understanding between natives and foreigners is not as apparent. Still, there are challenges, particularly with young women.

"There are people, really young people, they don't want to study – especially from Syria," Limar says. "We know a lot of girls from Syria, they don't want to learn German language because for them it's like giving up their home. It's like giving up hope that [they're] going back one day."
Hila Limar, 29, fled Afghanistan to Germany with her family in 1990. She now works as an architect and helps run Vision for Children, a private organization that provides integration services to refugees.
The one year anniversary of Abdalal's arrival in Hamburg is just weeks away. As the young man points across Outer Alster Lake to a favorite skating spot, he admits he doesn't expect to return to Syria anytime soon. Abdalal, grateful for the education he's received, is now better positioned to achieve his goal of becoming an informatics engineer. But despite the schoolwork, cultural immersion and new language skills, Abdalal says it's impossible to feel truly German – but that's OK. He wants to hold on to his Syrian identity as he builds a new life.

"I'm not afraid I'm going to lose it." Abdalal says. "It's inside me. You cannot change who you are."
Abdalal's friend, who now lives in Sweden, gave him a knapsack as a keepsake before he fled. He now considers it his most prized possession.
By Darina Gribova, Aruna Valliappan and Thomas Vogel.
Visuals by Kolja Warnecke
Tweet
Made on